This is a recipe for two types of pastry parcel with an Eastern Mediterranean, Greek or Turkish flavour to them. One is filled with spinach and feta cheese, the other with chickpea and tomato. They have complementary flavours and both go lovely with a tomato salad and a big dollop of humus.

Ingredients
Makes around 16 parcels, feeds 8 if you have them with salad and humus.
1 1/2hrs preparation, 20mins cooking.

First thing is to make the fillings, it’s best to make these an hour or so in advance of the parcels to give them time to cool down enough to be able to use your fingers. The fillings need to be fairly dry and sticky so the idea is to keep the liquids to a minimum. To streamline the whole process you need to do a bunch of things at the same time, or have a willing volunteer on standby to smash the chickpeas whilst you chop the tomatoes.

Heat a good splash (I dunno, say 2 table spoons) of olive oil in a medium sauce pan. Chuck in the chopped tomatoes with a grind of salt and blast them on a high heat for 5 or 10 minutes until they soften and reduce to a sticky gloop. Turn the heat down as they start to get gloopier.

Get the oil nice and hot then throw in the chopped tomatoes.

Both fillings use the onions so whilst the tomatoes are reducing, gently fry the chopped onions in a large frying pan for 5 minutes or so until they go soft. Then add all the crushed garlic and a good grind of salt and pepper.

Take half the fried onion and garlic and mix them into the gloopified tomatoes, or put them aside until the tomatoes are ready.

Now, add the defrosted chopped spinach to the remaining onions, add a teaspoon of each of the spices (Cinnamon, Cumin, All spice, Coriander) some salt and pepper and give it all a good stir. Heat it through for a couple of minutes then remove from the heat, mix in the about 3/4 of the chopped Feta cheese and turn it out into a large bowl.

By now the tomatoes should be nice and gloopy. Add a good pinch of each of the green herbs, Thyme, Tarragon & Rosemary, the saved onions and the smashed chickpeas. Stir it all through on a medium heat then add the remaining 1/4 of the Feta and all the chopped Mozzarella and turn it out into a large bowl.

So. That’s the fillings done. If all went well you should have two large bowls of roughly equal quantities of the two fairly dry fillings. Put them aside, go have a rest for an hour to let them cool down. You could even do the washing-up I suppose…

Here we have the two contenders.
In the left corner, healthy spinach and feta, in the right corner stodgy tomato and chickpea…

This part involves pastry. I’m not very clever with pastry. I think it’s a bloke thing. I expect it to be too much like some sort of industrial process that has rules that you follow rather than the random thing it really is. So for me this part gets messy! Lots of flour and quite a bit of egg on my face.

It’s hard to plan exactly how much pastry you’ll need so I tend to buy a bit extra just in case, you can always double wrap the parcels which comes out quite nice.

The secret is the use of the paint brush.

I’m aiming for 16 parcels. 16 seems to be about right for this amount of filling based on previous experience and is also and easy number to divide up the ingredients to. I start by mentally dividing the pastry I have into 16, I find it easier to work with smaller amounts of pastry, it reduces my mess and I find it easier to end up with similar sized parcels, but if you’re an expert just forget all this part and make your own bloody parcels, I’m sure you know how…

So in this case I have two rolls of insta-pastry™ so I’ll cut each in half and roll them out with the aim of getting 4 nice thin squares out of each half. The squares need to be around 4 inches on a side (centimeters are far too precise for this application) and nice and thin to reduce the “pastry is lardy” element that you may or may not get from your other-half.

Now add one egg’s worth (sin shell) to each of the mixes, it helps them to bind when they’re baked. Give them a good stir around then split them in to quarters in the bowl with a spoon. The plan is that each quarter makes 2 parcels, again this makes it easier to end up with parcels that are the same size, but even then you always end up with either a jumbo or a runt at the end… 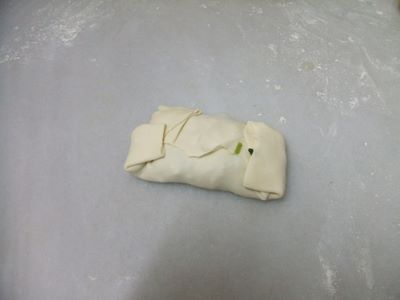 Get the oven nice and hot. I’m estimating around 200C as our oven doesn’t do numbers…
Bake the parcels for around 20 minutes till they are lovely and golden brown on top.

Whilst your waiting for the parcels to bake, knock up some humus to go with them (400g drained chickpeas, 1 large clove of garlic, 1 dessert spoon of tahini, egg cup of olive oil, juice of a lemon, salt & pepper. Bung it all in the mixer and blend till smooth; add drips of water if necessary)

Did I mention that they go well with humus.

These freeze perfectly and reheat from frozen in a combination microwave/convection oven in about 15 mins.  Or you can just nuke ’em.  If you make them in large batches are great for days when you can’t be bothered to cook. (But you really should make fresh humus to go with them).

Nutritionally speaking, erm… these probably have lots of nutrition and a so on, I mean come on, they’ve got spinach in them, that must make up for something. But who cares! They taste great and get lots of brownie points from the wife! 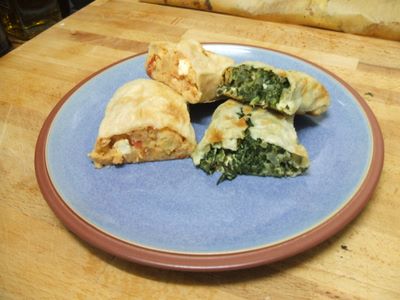 Here’s what you’re aiming for!

One thought on “Spinach, feta and chickpea parcels”