Here’s my easy version of a Paella Mixta.  Paella mixta contains both seafood and chicken and sometimes rabbit and pork too.  If you don’t fancy the chicken then just add more seafood, maybe some nice langoustines.  If you don’t fancy the seafood then you might be better off just giving the whole thing a miss as Paella really needs at least 50% of sea children to make it taste right.

This recipe is easy in that the Sofrito sauce isn’t too complicated and I use frozen pre-cooked shellfish.  It’s also easy in so much as living in Spain means most of the ingredients are very easy to come by.  The recipe is based off my personal taste preferences and a bit of help from a friend who told us her Mum’s secret recipe.  The reality is that there are so many different ways of preparing Paella that just about the only common element amongst all the varieties is that you should definitely use rice…  Using frozen shellfish could probably get you lynched. Don’t tell anyone. 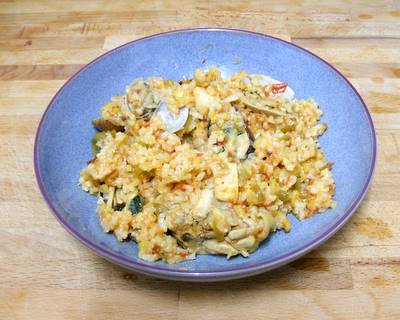 Ingredients
Feeds 4 people on it’s own or maybe 6 if served with something else.  Takes around 1 and a half hour from start to finish, though the last half an hour is waiting for the rice to cook.

There are three stages to this recipe.  The first is to make the Sofrito sauce which is just the onions, peppers and tomatoes fried in a good splash of olive oil until they reduce to a thick sauce. The second stage is to cook the proteins, in my case the chicken and the squid as the shellfish are already done.  The final stage is to add the rice and stock and leave to simmer until the rice has absorbed all the liquid.

Stage one : Making the Sofrito. 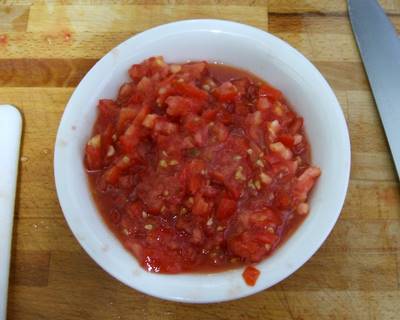 Take your pan put on a high heat, add a good splash of Olive oil and add the finely chopped onions and peppers.  Stir them around till the onions start to soften then add the tomatoes with their juice.  Add a pinch of salt here too. The idea is that when the sauce is finished you won’t be able to see the bits, so chop them all up small!

A nice splash of Olive oil.

Fry the onions and peppers for a few minutes first. Then add the tomatoes.

Keep on a medium heat, stir from time to time
until it look like this after about 10 minutes.

Now add the chicken and the squid and give it all a good mix around and 5 minutes or so of frying.

Then add the shelfish and mix them into the sauce.  Remember that I’ve cheated and used pre cooked shelfish that I got from our local pick-and-mix freezer place. So they don’t need to be cooked.  If you are using raw shelfish then you should add them at the same time as you added the chicken and squid. 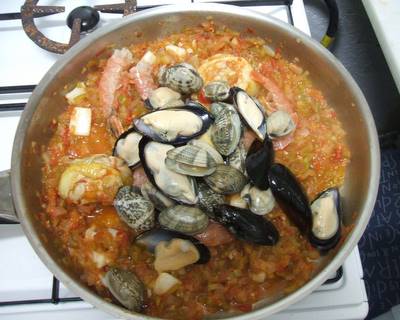 Add the shellfish and give everything a good stir. 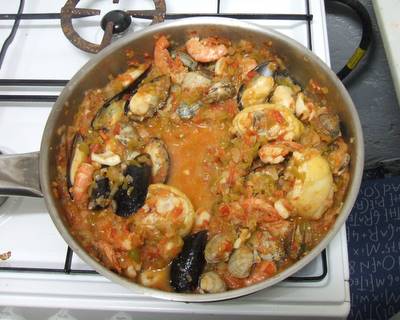 Once everything is nicely coated with the Sofrito sauce and it’s time to add the rice.  How much and what type is up to you, but it needs to be a grain that’s going to absorb loads of liquid and swell up to be nice and soft so if you can’t get Paella rice then Risotto rice will work just as well.  What you don’t want is one of those dry crunchy brown rices…  I’m lucky that I’m here in Spain so getting Paella rice is dead easy.  That hard part is deciding which brand to buy.

How much rice you add is up to you, the size of your pan and how many people you are planning to feed.  This recipe is based on feeding four, but with a bit of extra rice in the pan it can stretch to 6, just with less goodies.

I’ve added 1 small cup of rice per person plus one
for luck.  So that’s 5 cups if anyone is counting.
I estimate this at around 400g of rice. 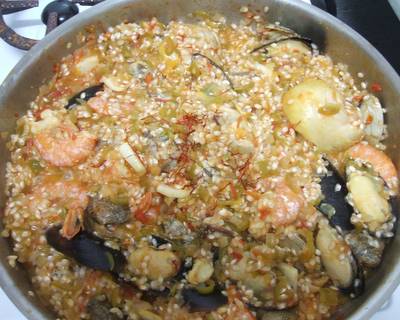 Mix everything up to ensure the Sofrito sauce coats all the ingredients.

At this point add a good pinch of Saffron, I added about a quarter of a gram.  How do I know? Well, the Saffron I bought was in a one gram container and there’s about 3/4 of it left.  The Saffron really makes the color so add more if you’re feeling a bit flush.

Now add just about half stock or enough to cover the rice and a bit more.
Give everything one final stir…  This is the last time you stir it!

Everything ready. Do not stir again from this point on.
Let the rice sit and maybe even stick a bit, it all adds to the taste.

Now, turn the heat up high for 5 minutes to get the stock up to boiling, then turn the heat down to as low as you can and let the Paella bubble slowly.  I like to put the lid on the pan for the first 10 minutes or so to make sure that the top layer of rice stays moist.

Keep an eye on the pan, testing the rice and adding a little more of the stock as necessary to keep every thing damp until the rice is almost about done.  You can open up a bit of a gap if you need too to get the stock to the bottom of the pan if it’s looking a bit too dry, but don’t stir, mix or scrape anything.

Once the rice is cooked and there’s no free liquid left turn the heat off and leave it to stand for 10 minutes before serving. That’s it.  Done! Go and eat!

Don’t forget to scrape the sticky bits off the bottom of the pan, they’re really tasty!