I’ve been continuing on from my prototype 1 to make a new version that is specifically designed to fit within a 4×2 Lego brick. The beacon socket and the start/stop button are placed to be directly below the two outer holes in the top of a standard Lego technics plate. I’ll drill thought the top of the block to make a button and a connector for the beacon. I’ll take the power out through the side of the block to a normal Lego power connector cable.

The new layout. I made two so I could pick the one that came
out best and also because it’s too small to handle one on it’s own easily.

The toner transfer and etch worked perfectly but unfortunately my alignment wasn’t so good. It’s really hard to get proper alignment on tiny boards as there is so little to look at and it’s hard to keep a hold of everything without things slipping. Also the thickness of the board itself causes a lot of hassle. My local shop only sells standard 1.6mm thickness FR4 but I’ve found a place online in the UK that sells 0.8mm and also 0.2mm double sided copper clad board which should really help!

After Etching. The toner transfer and etch are perfect
but the alignment is about 1/2 mm off horizontally.

Underside, after drilling. Luckily the miss-alignment
isn’t so bad that I can’t use it with a bit of scalpel work.

After population. I’ve made my own 0.05″ spacing mini
ICSP header (top middle of the board). This saves a lot of space.
I’ve made better use of the underside of the board this time by
moving the voltage regulator and a couple of resistors down there. 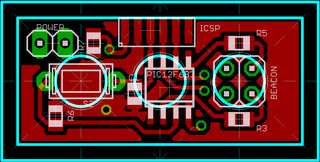 Circuit design. The power/mode button (in white on the left) and
the beacon connector (right) fit directly under the holes in the Lego
4×2 stud block (Cyan outline)

Comparison. The new board (upper) in comparison with my last
prototype (lower), the size is similar, but every thing is moved around
to fit within the Lego block. I’ve soldered directly to my mini ICSP,
I’ve used a smaller “turned pin” socket connector for the beacon.

Update : I got my bricklink order