This is a recipe for Cabbage and Bacon parcels that I kind of invented the other week when we bought a really great looking cabbage from the Boqueria for no particular reason other than it looked so green.

The recipe is a mix of fried bacon, potato and shredded cabbage all wrapped up in a cabbage leaf and baked in the oven. Goes well with humus and also importantly for us they freeze well and taste great re-heated in the microwave.

I’m sure there must be a national dish from Eastern Europe that is pretty much the same as this…
Ruth claims that anything containing cabbage, potato and bacon must be Irish!

First step depends on your bacon. The bacon we get from Lidel is like a 1cm thick rasher with a heavy rind and quite a bit of fat. So instead of using another oil in this recipe, I cut of the rind and as much fat as possible and sweat it all out in the pan on a low heat whilst preparing the other ingredients. If your bacon isn’t very fatty or you want to be super healthy you could just use olive oil or whatever.

Whilst that is happening, chop up the onion and potato and bacon. Everything needs to be fairly small as it’s going to end up being wrapped up in the cabbage leaf and large bits are harder to fit in. 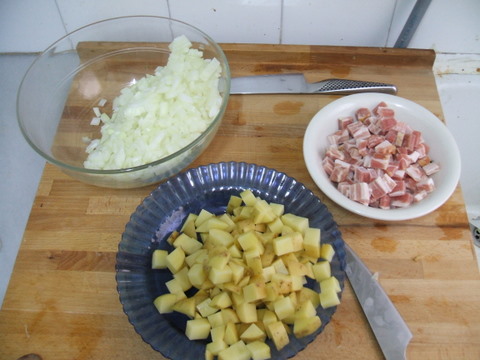 When you have the bacon fat sweated out remove the rind from the pan and bin it, or if you not doing that bit just heat up a pan with a good splash of oil. Add the potato cubes and fry them on all sides until they start to crisp up. Keep moving them around so they don’t stick. But don’t worry too much about stuff sticking to the bottom of the pan cos it all gets used up later when we add the cabbage.

Whilst the spuds are cooking start with the cabbage. Give it a good wash and break off the outer large leaves to be used for the wrapping. For this recipe you need 12 good sized leaves, 20cm(ish) diameter, preferably without too many holes or rips. It depends on the size of the cabbage so you may need to steal a few leaves from your neighbours or something… Or just use more of the inner leaves. Now shred the inner of the cabbage and put it to one side, discard the hard bits from the core.

At this point fill the kettle and put it on to boil.

When the spuds are pretty much cooked (give em a try) add the bacon bits in and fry for a minute or two, then add the onion and garlic and leave to cook for a few more minutes. The onion will release loads of juice which will help to lift and bits stuck to the pan.

Now whilst the onion is cooking we need to prepare the cabbage leaves for folding. First we need to wilt the leaves to make them more flexible, put the leaves in a big bowl and pour over the boiling water. That’s what the kettle was for earlier. Leave them for a minute or two till they start to soften. You might need to do this in batches.

When the leaves are wilted we need to perform a special secret operation. We need to cut the back off the base of the stems of the leaves. The idea is to reduce the cross section in the direction we want to fold making them more flexible and more likely to stay put when we fold them up.
A photo is worth a lot of words in this case. 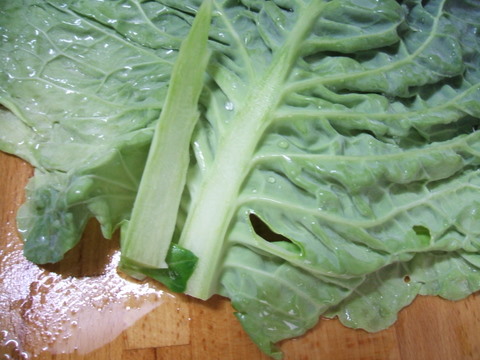 Slice off the back of the stem to make if more flexible.

Slice the stems off of all the leaves and put them to one side to drip dry (the leaves, not the stems).

Around now the onion should be pretty well cooked so it’s time to bung in the shredded cabbage. I did mention that you need a large frying pan for this didn’t I? 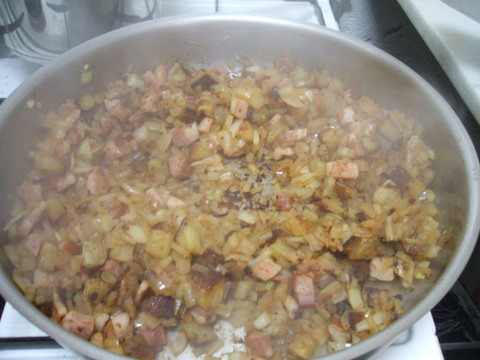 Send in the cabbage!

Now put a lid on the pan and turn the heat to medium and let the cabbage cook and soften. This will take about 5 – 10 minutes, you’ll need to give it a good mix every couple of minutes to make sure it all cooks. Sometimes I add a splash of water at this stage just to help build up some steam.

When the cabbage is almost done it’s time to add a good grind of black pepper, a very good grind in fact, cabbage and black pepper go very well. I don’t add any salt at all as the bacon is pretty salty already.

If you have them it’s nice to add a handful of toasted pine nuts at this point too, but it’s not that important really.

After about 10 minutes of cooking the cabbage should be nice and soft and well mixed in with all the rest of the ingredients. Turn off the heat and turn the mix out into a large bowl and leave to cool a bit whilst we clean up and prepare for the next step.

Clean up a bit, take a break, have a pee…

Now on to the construction phase.

Oil your baking dish with a splash of sesame oil (or not..)

Add the beaten eggs to the cooled filling mix and give it a good stir. The mix should be cool enough to handle at this point and should not cook the egg when you add it.

Take leaf and place it face up on your board. Dollop a two spoonfuls of filling into the middle and fold the top in, then the sides, then roll the base up. Place them stem down in the baking dish. If you get the quantities right you should get 12 parcels from this much mix. You can always re-open parcels to add or steal some filling if things don’t work out right.

Two spoons of filling in the middle.

Fold in the top. 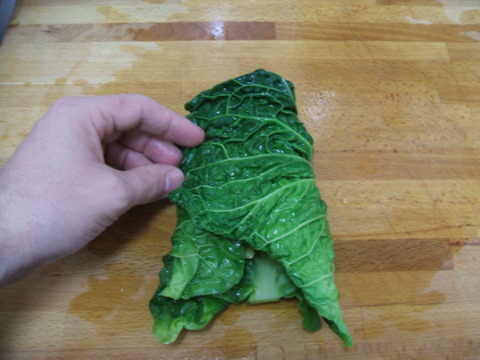 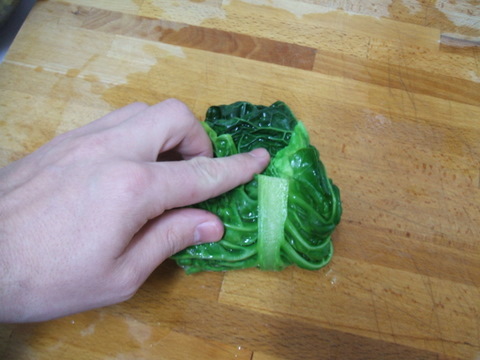 Finally fold the stem up over then top, it should be easy because we cut the backs off.

Luckily for me 12 parcels fit perfectly in the dish.

Drizzle a little more sesame oil over the parcels and place them in a hot oven for around 25 minutes till they are nice and brown on the top. I’m not sure exactly what temperate to use as our oven is pretty crap, it’s probably the cheapest our landlord could get. It has no temperature or gas mark settings, only off, half or full. I put it on full which Ruth reckons it’s around 200 degrees C.

That’s it. The parcels should be nice and brown on top and underneath too.

The egg should serve to bind all the filling together so that they are nice and firm and can be cut easily.

The finished product. Lovely with humus and tomatoes.
Freezes and re-heats well and probably has lots of good vitamins and stuff.

If you try this recipe I’d love to know how it turns out.
I’d also like to know if this is an existing recipe or something I invented…

3 thoughts on “Cabbage and bacon parcels”