Life does get rather busy sometimes.  For us it was having a baby and moving house in the same week.  Subsequently I’ve been rather preoccupied.

But that was nearly 6 months ago and things are getting a little more sorted out now, plus it was my birthday recently so I thought it was about time to get back in to electronics and also to add some new posts to this blog.

So to start with I ordered some gizmos from Deal Extreme, most notable was a bunch of tweazers to make working with SMD components easier.  There’s nothing like getting new shiny tools!  And for the price these are excellent value. The Bamboo ones are really nice. 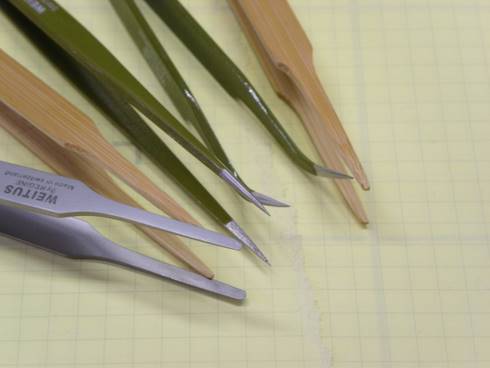 I also bought a bunch of stuff from a shop I’ve not used before called Seeedstudio they had some really nice SMD switches as well as lots of other nice things.  Their prices are great and the delivery cost was very reasonable.  Speedy too, I’ll definitely be using them again.

Here’s some of the things I bought.

These were just 15 US cents each. Product info here.

These were just 20 US cents a pop. More info here.

I’m a sucker for tiny switches, I seem to stockpile them.  I bought some lovely tiny smd momentary action switches with built in LED’s last year and I can’t actually bring myself to use them up as they’re so nice.  That’s sad right…

I also got these…

6V 60 RPM geared motors for the Robot that will happen one day.

But best of all, to get myself back into electronics, but without having to break out all my kit which is still packed away in the spare room, I bought this great Oscilloscope kit.

I’ve started on it already, but I’ll write up a full post later on when I’m done.

So, there you go.  After a long blog drought I’m back at it.  Hope you enjoyed reading.